Places women CRAVE in Toronto____________________July 1, 2010
Body blitz is honored to be part of a list of dynamic female entrepreneurs featured in CRAVE: The Urban Girls Manifesto. These lifestyle books are devoted entirely to the best local businesses owned by women and have just published their first Toronto edition. The idea for CRAVE started in 2001 in Seattle when one busy woman running her own business realized she rarely had time to see her other busy girlfriends who were also running their own businesses. So she put them all together in one book and CRAVE was born. These guides clue you into the hottest insider shops in the city including great little boutiques and services usually known only to locals, showcasing some of the most creative, interesting and gutsy female proprietors in the city. We were thrilled to learn that when several of the proprietors were asked where they go to relax, they said “body blitz!” Next time you are at the spa, ask to have a look. We have a limited number for sale for $20.00. 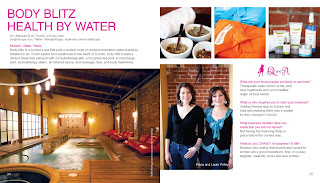