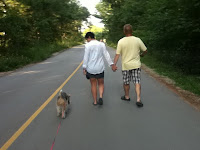 Was it love at first sight? Well… it was - in a round-about way.
Physically, he was not my type. I was looking for Mr. Tall, dark and handsome with a little athletic ability, intelligence and good money sense on the side (yeah me and every other 21 year old single woman at the time). But instead, standing beside me at the bar in the basement of the Madison Avenue Pub was Mr. Average, blonde and chubby. It was September 1984, I was with a girl friend, he was with his squash partner and none of us paid too much attention to each other…at first. As the night wore on, my girlfriend started telling me how she had been agonizing about calling a guy she hardly knew to ask him out. I didn't think asking men out was that big of a deal so to prove my point I turned to Blondie Brush-Cut next to me and said, "I'm doing a survey and would like to know what you think about women who call men they barely know to ask them out on a date." He smiled at me with a devilishly crooked grin then reached into his pocket, pulled out a quarter (no cell phones back then) handed it to me and said, "I'm Rob, I'll give you my phone number and how about you call me and we'll see what happens." At that moment, I knew he was the one. Any man could be handsome, smart and play sports, but how many had his quick wit, charm and confidence. We ended up talking with each other until closing, forgetting completely that we had arrived with other people. Twenty-five years later, 20 years of marriage, a mortgage, 4 kids, pets, home renovations, and living through great times and some really, really bad ones, we're still together. When friends ask how we keep things going, we usually look at each other and make some wise crack, like it's cheaper to keep her. But all joking aside, I think it's because even though we've seen each other at our worst, our love for the qualities that make each of us our best is what we can't seem to live without. Well, that and the fact that even tall dark and handsome men have dirty underwear and no matter how athletic they are they still can't seem to get it into the laundry basket.
Anita MacLeod
Posted by Body Blitz